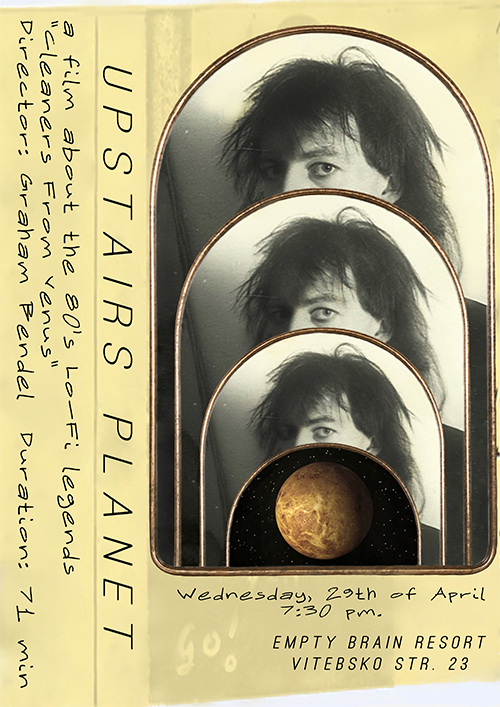 Upstairs Planet - a film about the 80s Lo-Fi legends, Cleaners From Venus

It is a great opportunity to see the film about the 80s Lo-Fi legends, Cleaners From Venus. The film was only showed several times worldwide and here we have it in Vilnius.

Martin Newell is a poet, songwriting genius and Godfather of British Lo-fi, ‘Upstairs Planet’ is about the greatest band from the 1980s you’ve maybe not heard of: Cleaners From Venus.

Funny, moving and entertaining, Upstairs Planet is a story about a relatively unknown cult 80s musician who has been a tremendous influence on many and admired by a whole host of artists (MGMT, XTC, Ariel Pink, John Cooper Clarke, Mac deMarco, etc). We’re talking cassette culture, DIY punk attitudes and intelligent, poetic lyricism that should have found a much wider audience.

Looking like a 19th Century asylum warden, these days – Martin Newell, a natural raconteur, gives us his eccentric, irascible world view and hints at why, maybe, the big time wasn’t for him.

Graham has written novels, published books and even this year co-wrote a song with the increasingly popular art-rock band Snapped Ankles. He is related to the man who first published The Naked Lunch, Lolita and the SCUM Manifesto.

All done independently, without big companies and a big budget.