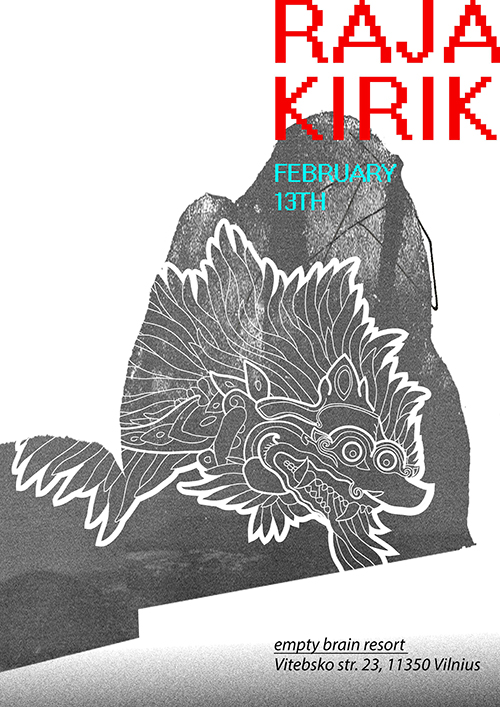 Raja Kirik tried to capture the theatrical Javanese folk dance called “Jaranan Buto”. The dance portrays a bunch of giant horsemen riding giant horses. It was developed in 1963 on Banyuwangi the eastern part of Java island. This dance incorporates trance and magic trick lead by a shaman with a typical Java syncretic ritual related to the ancient Java animism, Hinduism and Islam. The amok, the war, the giant, the anger, that takes part in Jaranan Buto has a strong connection with the history of Banyuwangi.

Until the 18th century, Banyuwangi was known as “The Kingdom of Blambangan”, an area with a long history of war. Blambangan considered the last Hindu Kingdom in Java before it was conquered by Mataram Kingdom (1587–1755) with support from VOC (the Dutch trading company). After the war, Mataram wrote the famous literature “Serat Damar Wulan” that included a fictional giant villain as the king of Blambangan. Later, the defeated people of Blambangan rendered this giant character into a hero. Along with this narration, “Jaranan Buto” came up as the antithesis of “Serat Damar Wulan”.

“Jaranan Buto” developed from the intention of protest, the way to renegotiate the injustice circumstances or the way that defeated people maintain their dignity and cultural identity. The urge to create a new work out of it is not as simple as conserving tradition or uplifting Indonesia’s exotic culture to the eye of the world. “Jaranan Buto” itself reflected the struggling faced by a lot of people in the world. Somehow, we could see it as a resemble of the war of narrative happened nowadays, where one narrative fighting over another growing fear, hate, and even a sense of togetherness between societies.

Fittingoff is pianist/composer/improviser of Armenian descent, born in the Soviet Union, raised in Russia, influenced by American and British alternative rock and indie, and French and German electronic music. All that led to the approach some people feel as post-rock and minimal techno and what mass media calls minimalism and neoclassics. Сontinuity in rhythm, dynamics, duration and dramaturgy lulls the audience into submission.

Besides his solo career, Araik v. Vietinghoff-Scheel is an active participant of free improvisation scene in Russia and Georgia, a pianist to a few bands and trans-continental improvised-music collaborations. He works with both well-tuned and substandard instruments valuing the latter as unique and “site-specific”.

“One composer said that, unlike writers who face a blank page at the very beginning of their work, composers deal with a page black with notes ever written. A composer’s duty is to clean that page and leave only notes of one’s new music.

My goal is to leave notes that would balance between academic and popular music traditions.

In the twentieth century, starting from WWI, the human kind got disappointed in the Idea of Progress, so the art turned to uncomfortable, terrorizing shapes, and only progressed in that direction after WWII. At the same time, popular music arose to comfort the human being; so the art divided into two opposite states. In this regard, we have got academic music still interesting intellectually and touching, though we can’t remember and sing its pieces (it has gone that far from human comprehension), and popular music that continuously repeats itself, which pieces get dated within the next few weeks. I want my pieces to be recognizable, I want people to sing my melodies, at least some of them. And yet, I stay away from what I myself would call stupid music. Because simple does not mean stupid.”