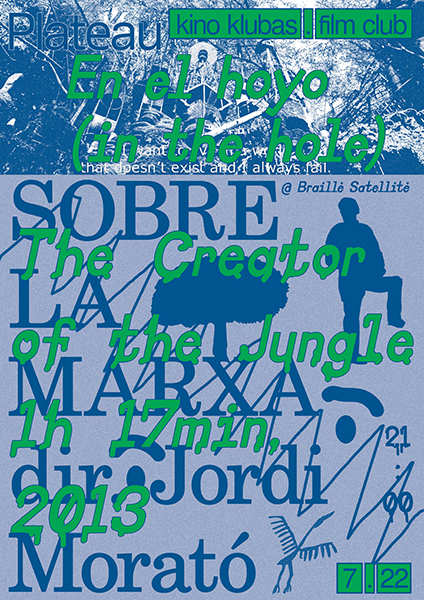 This is the special cinema screening presented by film club „Plateau”. Perpetually changing its’ screening locations „Plateau” seeks to find fresh ways in order to link the environment and filmic experience. This time it invites you to sit down in a hole, surrounded by trees, and watch a film as a point of departure for „Braillė Satellitė“.
„Sobre la Marxa“ (The Creator of the Jungle, 2013, Spain, 1’17’’), a film by Jordi Morató.
This is the story of a man who created a jungle next to the highway, building with his bare hands beautiful and unbelievable works of engineering in the forest. This is also the story of how he ended up burning them to ashes to reconstruct them, time after time, over decades. He is known as „Garrell“, also as „Tarzan from Argelaguer“, and he is not driven by any apparent purpose, except one: going „on the go“.