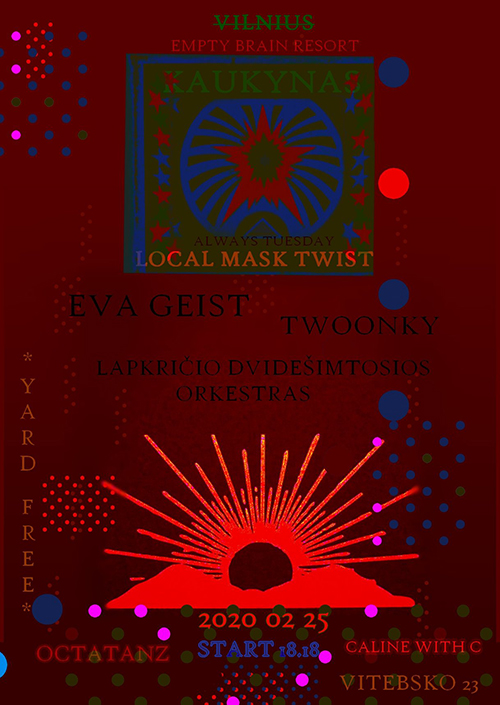 Twoonky is the side project of the TwoMonkeys duo, music thrust into dance electronics, night time digressions, cosmic dreams, and disco hallucinations. Breath and rhythm, pulsing out and inside our brains. Smoke comes out of the eye and falls slowly between all us.

Sound designer, live performer and producer based in Berlin, Andrea studied Performative Arts and New Media in Rome.From 2010 Andrea was formerly part of the synth pop duo le Rose. In 2013 she moved to Berlin and released “Magic Mirror”, first EP as solo artist.

In 2016 she accomplished an advanced training in sound design and gave birth to her alter-ego Eva Geist. The EP Dniheb on french label Macadam Mambo came out in 2016. Geist’s music builds up acinematic musical journey around rarefied melodies, arpeggiators, soft beats and space disco. Drum box bossa and trance inducing synthesis; braid an enigmatic story which counterparts are modern tribalism and spiritual technocracy. Her first album Äquator System; was releasedby the american independent label Elestial Sound (tape/digital).Together with Laura ODL (Ondula), Geist is half of the duo As Longitude (Knekelhuis /NH).

L.D.O. is a brass/punk/doom orchestra from the legendary Vilnius DIY club “XI20”. The Band is formed by a handful of terrible people referring to themselves exclusively as Partners. “Excuse me, Partner, what are your possibilities to rehearse next week?”, “Partner, would you mind if I kindly ask you to move your drums a bit?”, “Partner, which currency will we pay in for our tour van to Russia – euros or bitcoins?” Sick stuff!

Despite Partners’ very minimal human attractiveness they are very eager gig players. Invite them and they will play the Sunshine-set and right after a short break the Sunset one. During the first you will dance and be happy, during the second your hair will turn silver.

Caline with S is a project exploring the unknown and challenging the standard. Music is perceived as interdisciplinary and intercultural, with open and abstract mind, which balances between darkness and light in order to find harmony. A special twist for the Carnival.