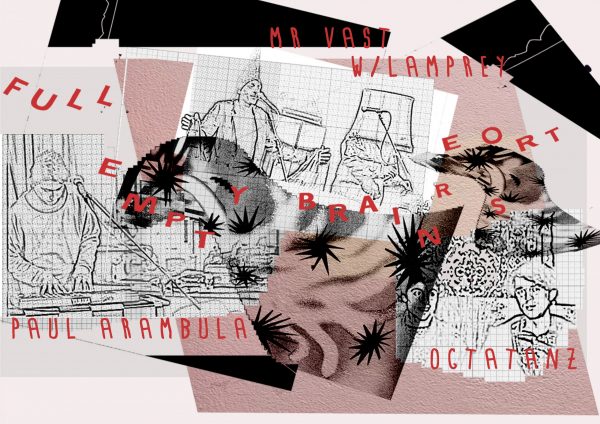 Paul Arámbula brought a keyboard from Phoenix to Berlin and plays songs about familiar strangers, saying a lot of nothing, and forcing the easy life. Through waves of sustained hardships, living quarters, and keyboard keys, come songs that have been played for live audiences in Lithuania, Spain, the UK, Austria, Germany, the US, and many more to come. Paul released the debut digital album “A Bit of Both” in 2017 – described as “an intimate and sincere treasure chest of experimental pop songs made with synthesizer, drum machine and vocals.” With an upcoming cassette entitled “Towantowanto”, Paul continues to try and expand the sonic and emotive possibilities of the pop song. “Out where the people play, that’s where I go each and every day. Then, when they go to sleep, that’s when I look for something to show them when they wake up.”
https://arambulapaul.bandcamp.com/
https://soundcloud.com/paularambula/

Wevie Stonder frontman and perennial cabbage enthusiast Henry ‘Mr. Vast’ is back on the menu and all up in your grill with special assistance from Lamprey “The Living Lampshade” – Christoph Rothmeier, in another universe the drummer from another shared project Kröter, and one half of the band Hunger.
https://www.youtube.com/user/mistervast
https://www.youtube.com/…/UCppXHz0why_4RndLw6FTc1Q/videos

OCTATANZ is Oscar der Winzige and Matas Aerobica, together they offer a selection of ideas floating around in the deepest recesses of musical sub-culture.