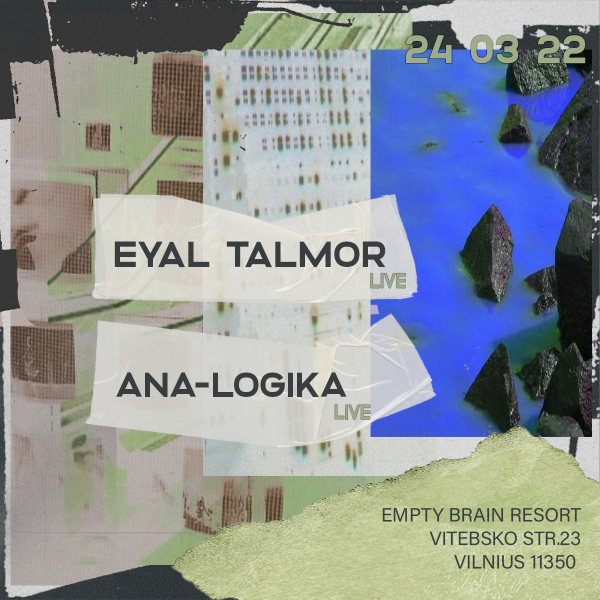 Eyal Talmor (PT) is an experimental musician dealing with unusual behaviors of electronics and sound. His performance is based on improvising with a synthesizer that went through an incident which created the possibility to operate beyond its planned capabilities, connected to a normal functioning machine that is becoming influenced in an unintended way by corrupted MIDI data sent back and forth. This allows him to reach sounds otherwise impossible, while dealing with the chaotic nature of the involved machines and the live setting in real time. The described method makes every performance unique and unrepeatable, researching stress conditions, chaos, the physicality and behaviors of new sounds and their influence on the listener.
https://crippleclerk.bandcamp.com

ANA-LOGIKA (LT) is Raimundas Eimontas and Marius Paulikas duo exploring the realm of analog (as well as digital) noise and intersections in between eclectic streams of avantgarde and experimental music. Improvisational to the core, the duo has never rehearsed before a concert, opting instead to pick their weapons of choice and then make it up intuitively as they go. ANA-LOGIKA refers to “Other-Logic” – an alternative way of thinking and acting out music: improvisation intead of composition, fluidity instead of stylistic rigidity, intuition instead of pre-determination, being in the moment instead of planning ahead. Originally formed in 2016 as a resident group inside the underground art space “Raudonas Namas” (later – “Raudona ZOOna”) in Kaunas, the reclusive duo has rarely performed elsewhere; this is the first occasion to see them perform outside of their city of habitat.